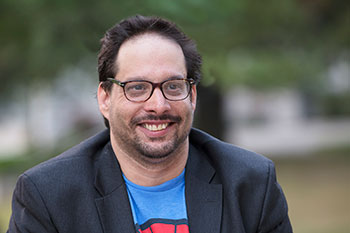 James Baldwin once said, “The place in which I’ll fit will not exist until I make it.”

I can’t think of a more apropos sentiment that sums up what Hobart and William Smith Colleges mean to me. The Hobart seal, or in this age of Game of Thrones, sigil if you will, has one word in Latin: disce. Learn. Harvard got veritas, but I like ours better. Learning is at the heart of the HWS experience — it is in the colleges’ DNA and our culture — and it doesn’t stop at the classroom.

I transferred to Hobart in the fall of 1994 after briefly attending Vassar. Vassar’s annual Homo Hop attracted thousands of LGBT students to Poughkeepsie, New York, a town larger but not terribly different demographically than Geneva. I bring this up because in the mid 1990s, Vassar stood as sort of the exemplar of what an ideal LGBT friendly school could be.

Students from as far away as Bowdoin and Oberlin often attended the event. So, when I arrived at HWS, my initial impressions of the students and some of its community were adversarial at best. The LGBT Student group was called the “Gay, Lesbian, Bisexual, Friends Network” which sounded like a support group. The group was virtually moribund and met in the basement of Comstock. Many entered through a side door because the stigma of being gay on campus was so profound.

Not just at what I perceived as the backwater LGBT “culture” I found, but this was the 1990s. We had no dating apps. Hell, we barely had email.

There was a running joke at virtually every liberal arts college, that on the first day of any LGBT club meeting over a hundred people would show up.

But on the second meeting, five maybe.

We were looking to hook up, okay?!

That same year, one of only two out male professors that I was aware of (the other being Eric Patterson), Craig Rimmerman — who would also become a mentor, and friend to this day —was brutally beaten with a pipe in a viscous hate crime two blocks from campus. This was during my first month.

Durfee Hall was part of mini-quad, three all male dorms that housed mainly athletes. Being an athlete, I was placed there for that reason. It was also the only place on campus that still had open showers. I mention this, because in the navigation of identities, that we all as queer folk possess, we find ourselves making decisions about how and when, and what we choose to identify with that are not always conscious.

That is to say, I hadn’t intended to come out in this environment — given the shower situation. So, the split-second decision I made to step outside my dorm room door and defend Delgado was less an act of bravery, than a combination of adrenaline, instinct, and anger. I heard one of the four students who’d surrounded, and bullied Delgado tell him “not to put that fag stuff here.” I stepped outside my door and between Delgado and the lacrosse players, and made my own threat of retribution if they did not disperse.

“Hey Vas,” (my nickname by the LAX team members on my floor), “why the fuck do you care about this fag?”

Because, I responded, I’m a fag, and I know I can kick your ass.

I remember writing about the experience in Waves, the William Smith feminist, weekly political magazine I edited, and I’ll never forgot the odd sense of dissociation I experienced the following day.

It’s one thing to come out one’s self, it is yet another to make this announcement among a very small community, and where threats of retribution for this seemingly small act were all too real.

This was also a very small college, where you saw everyone at some point during the day, except during the winter.

A side note to admissions, you really should tell all prospective students that the campus they see when visiting in July only exists briefly while here as a student, and disappears under many feet of snow in late October — only to reappear around graduation.

You may want to try something catchy like, “Winter is Coming.”

Over the course of my next two years a phalanx of progressive students, in tandem with the incredible solidarity of William Smith’s women of color, and residents of Umuja House, (in particular, Deborah Black and Brandon Hutchinson), we embarked on a campaign of #resistance to change the things we felt left us at odds and disenfranchised us from the prevailing student population.

Our strength was buttressed with the remarkable and indispensable support of professors Roxi Hamilton, Jodi Dean, Susan Henking, Lee Quinby, Lis Lyons, Betty Bayer, Marylin Jimenez, and Toni Flores, who supported us at every step.

I must note here, again, interestingly that much like the female Republican senators that stood up to the repeal of the Affordable Care Act, these were the female professors for the most part that spoke up in our defense.

Soon after I reluctantly stepped in as chairman of the GLBFN, as no one was willing to take on the mantle, and insisted on a female co-chair. It was in this role that I became aware that the largely conservative Hobart Student Association, made up primarily by members of the college republican group, had emptied the student activity coffers to bring to campus psychologist Richard J. Herrnstein, and political scientist Charles Murray, the incredibly divisive and racist authors of the 1994 book The Bell Curve: Intelligence and Class Structure in American Life to speak on campus. The less said about the incredibly racist and divisive book, the better.

I uncovered the fact that the HSA had railroaded voting to fund both the booking and the astronomical fees these speakers commanded when I attempted to attract Andrew Sullivan to campus and found the student activity budget virtually non-existent.

You may know Sullivan now from Real Time with Bill Maher, but he had at the time just authored Virtually Normal: An Argument about Homosexuality, and had been newly minted as The New Republic’s editor-in-chief.

Trust me when I say that these print publications were of great importance at the time. I believe you may still find them in the Warren Hunting Smith Library.

Let me put the time and political climate at HWS at the time in perspective, because it was not un-reflective of America writ large. This was — if one recalls — the year of the so-called “Republican Revolution,” an anti-Clinton backlash that ushered in Republican Newt Gingrich and his cohorts’ and their “Contract with America.”

The colleges’ community as a whole reflected the climate of the times.

But we protested. We resisted. The president of the Colleges went so far as to threaten local police intervention for protesting Herrnstein and Murray. I’ll never forget the candle light vigil, and the voices of Professors Jimenez, Hamilton and Flores who began the hum of “we shall overcome,” that became a chorus of hundreds on the quad that night.

And we did make real change.

In this way, the Colleges’ dispensed an education in realpolitik that has propelled me throughout my life and career. By the time I left, we had created a place where we could exist, and also redefined what the coordinate system could be: not one that was only based on gender equality. But one that incorporated the various intersectional identities of all of us and eventually would create the community you enjoy today.

One caveat: if the recent events at Charlottesville have taught us anything is that these battles and subsequent victories are fraught, and more tenuous than we’d like to believe. That’s why we must tell these stories. That is why it must be part of the public record and never erased. This is why the LGBT Resource Center is of such import. I cannot tell you the pride I have as an alumnus in seeing this remarkable center in juxtaposition to my memory of that basement room I encountered when I arrived here 23 years ago.

And we did not do this alone. It was in fact the participation and solidarity with the Black and Latino student organizations as well as Hillel, and many others, are an integral part of this history.

As part of the visible LGBT community, there were too few of us to shoulder these burdens alone. But the coalitions we formed challenged, and changed us all for the better. It was in fact the intersectionality of our various identities that gave us strength, and helped us find our voice.

The fact that this occasion is being performed by our first Black president — who is also an alumnus who fostered change here — speaks volumes to the themes that I hope resonate out from today for the rest of your lives.