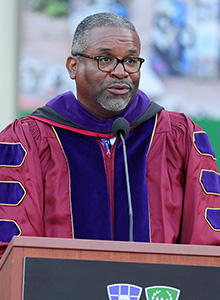 Thank you, Professor Brophy for that powerful reminder of higher education to make the inside of your head a more interesting place to live. And I would add that when deployed correctly, your education can also be a mighty tool to make the world around you a more interesting and better place to be. In fact, I think it’s the responsibility of those fortunate enough to attend college to make a difference in the world.

I first arrived at Hobart and William Smith in 1979 from the Bronx High School of Science. I majored in history and economics, ran cross country and played basketball. I benefited greatly from my professors who mentored me and pushed me to excel, the Hobart and William Smith deans, my coaches, and the many staff who worked so hard to ensure that I had what I needed to succeed.

When I returned to campus last year to deliver the Convocation address, I was thrilled to see that even though so much has changed since I was a student, the ethos of the place remained.

The faculty I met are experts in their fields who are dedicated to teaching – like Professors Brophy, Arens and Lucas. The students – like Brianna, Tyler, Taner and Ally – are articulate, driven and compassionate. The staff – like Coach Hanna and Kathy Regan – are among the best in the nation. Our alums – like Tom Bozzuto, Kirra Guard and our distinguished speaker Laura Sydell – are at the top of their fields. And Geneva today is a vibrant place, full of energy and momentum.

A year ago, I left Geneva to return to Texas positive that the Colleges were on an upward trajectory.

That became especially clear just last week when we received important outside validation that all the hard work and effort of the past decades is paying off.

Last week, we learned that Forbes has named HWS among the nation’s top institutions with the best return-on-investment, including HWS in its “2017 Grateful Grads Index.”

2017 was the second year in a row, and the third time in the last four years, that Hobart and William Smith were recognized among the nation’s top colleges and universities with the most recipients of Fulbright Awards.

This year, Sports Illustrated and Money Magazine ranked the Colleges among the best for sports lovers.

You’ll see that the banners behind me feature photos of our students abroad in programs on every continent except Antarctica. A full 60% of Hobart and William Smith students participate in off-campus study before they graduate. Whether it’s interning with an organization in Vietnam, studying Spanish and living with a host family in Spain, or conducting fieldwork on the Great Barrier Reef in Australia, such experiences complement and enhance the on-campus academic program.

Indulge me for a moment while I read a few comments from current students cited in the Princeton Review:

One student says, "I've never had a professor that did not inspire me while here."

Another student declares, "Basically every single class I have walked out of I have called my mom or dad to discuss some wild new set of information I learned that I hadn't known before. That's a pretty awesome thing."

Another says: "I absolutely love what I've done in my studies here and how my mind has morphed in turn for the better."
One student said that HWS is "an extremely well-rounded college," with "superb academic, career, extracurricular and athletics opportunities for all its students."

Another says that HWS has "an extensive alumni network" that helps students find work after college. They also report excellent "access to great internships."

Now, I’m not sharing these comments to convert any of you into loving Hobart and William Smith – I realize I’m preaching to the choir. We are all here because we want to be here, because we KNOW that HWS is a place for transformation, a place that gives students clarity of purpose and direction, and a place that produces extraordinary outcomes.

Recognition like we’re getting from Forbes, Money Magazine, Sports Illustrated and the Princeton Review comes from years of hard work, of striving to always be better. It’s faculty spending hours with students talking about theory or working together on research. It’s staff members working late into the night to make sure that students have internships and solid financial aid packages. It’s coaches bragging just as much about the academic achievements of their players as they do about scores and stats. It’s alumni and alumnae who stretch to make a transformative gift or offer a job to a recent graduate. It’s community members who mentor our students in the hope that those students will take what they have learned here in Geneva and apply it to whatever community they will eventually call home.

Hobart and William Smith is a place that traditionally punches above our weight and lately the guidebooks and the marketplace are catching wind of it. This school is hot.

In the coming year, I intend to focus on four pillars of effort that I strongly believe will give us the additional resources and motivation necessary to leverage our many successes and take our place among the best colleges in the country.

First, we must ensure that the student experience in the classroom, in the residence halls, on the playing field, abroad, and in the community is multi-faceted, relevant and comprehensive.

Second, we must deepen engagement within and among key constituent groups, ensuring that all members of the broad HWS community and beyond understand, experience and can leverage the return on investment of a Hobart and William Smith education.

Third, we must be market smart and mission driven. The success of the Colleges moving forward will be defined by our ability to evolve programming, increase productivity, and pursue new revenue streams while also ensuring the integrity of the Colleges’ values.

Fourth, we must claim inclusive excellence and diversity as a key strategic priority. The educational benefits of diversity directly and powerfully impact all students. With an understanding that inclusion is a compelling public good, we must work to increase the racial and ethnic diversity of students, faculty and staff, and celebrate all dimensions of diversity.

So we begin the new academic year knowing that we may face challenges and disappointments ahead. We live in a world where bigotry still exists and can, as it did in Charlottesville, turn to violence.  Where affirmative action must be defended and human rights protected. Where climate change is doubted and social media passes for news.

But we also begin the new academic year as a community grounded in the principles of justice and respect, that values and defends diversity. We are a campus that stands united in the pursuit of knowledge; that believes in the capacity of art, literature, music, theatre and dance to uplift; and that recognizes the power of science and ideas to change the world.

One of my favorite quotes from Martin Luther King, Jr. goes like this: “The function of education is to teach one to think intensively and to think critically. Intelligence plus character - that is the goal of true education.”

I believe that Hobart and William Smith is teaching students to think intensively and critically, and that we are building the kind of community that gives students intelligence plus character.

I look forward to the year ahead. Thank you.