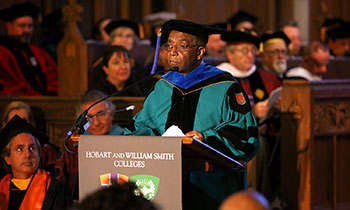 Mr. Bozzuto, Chair, and members of the Board of Trustees; fellow members of the faculty and administration; students of the Colleges; alumni and alumnae, families and friends of Hobart and William Smith Colleges, both here present or viewing these proceedings from afar; family, friends, former colleagues, and honored guests of our new president; and citizens of Geneva, a place which has been since 1818 home to Hobart and William Smith Colleges:  I am moved beyond measure by the honor given me as his former dean, to stand before you all  in this formal ceremony to declare that Gregory J. Vincent, is well qualified and imminently suited to hold the office to which he has been called.   A man about whom so much lies already in the public domain, his myriad academic accomplishments, his many accolades, his commitment to social justice, he has no need of an introduction and least of all a dean’s recommendation.

Of many things have I dreamed.  However, to imagine that I would be called on to introduce a president who is at once a former student and an accomplished individual, for whom I have only the highest respect for his intellectual acumen and complete confidence in his ability to turn a vision into reality—that dream was not part of my subconscious.

Fate has often a way of bringing the unlikeliest individuals together.  Gregory Vincent arrived at HWS as a freshman in Fall 1979 from Bronx High School of Science.  I arrived also in Fall 1979 from Dartmouth College, in New Hampshire, as Dean of Freshman to Hobart students and assistant professor of German at Hobart and William Smith.  His work as an RA, a resident advisor, caused us to have regular contact over his four undergraduate years and allowed me, if I may use a rather old-fashion phrase, to take the measure of the man whose diploma I would sign 1983.  I realized early on, and have not once been disappointed since, we at HWS had in our student body a young man of impeccable integrity because first and foremost, he knew himself.  He acted on values which required him to live and work not solely for himself and but also on behalf of others, hoping as a young student to secure for them the same opportunities he would have for himself; a young man who showed respect: even while enjoying the life of a student, he valued the opinion of his peers and “raised the orange and purple high,” never to shame them ever, to paraphrase the lines of his Alma Mater; a young man of humility and tenacity: he could acknowledge his mistakes, but then push ahead to the next goal; a young man of much curiosity, not hesitant to proceed beyond his immediate comfort.

As the Second Middle Year, as the Junior Year was then called, glided into the Baccalaureate Year, our discussions turned to professions and careers.  To my amazement, I found myself sharing with him thoughts, rejected by me at 16, which a certain man had suggested that I consider.  Greg claims to quote me still, verbatim.  I deny not that I said those words.  However, for this grand occasion my advice went something like this: Greg, find something that you love to do and you will never work another day in your life.  Do not be afraid to fail, because if you have not failed or faltered once, you have not tried, and when you try, do your best.  Whatever you do and wherever you go, let your work have meaning for yourself and for others.  And above all, do not be satisfied only with having an influence, but work to have an impact.

Our conversations did not end with his graduation, but have continued over these several decades, decades which have provided me with sufficient evidence that my earlier assessment of Gregory Vincent was right on the mark.  And for that reason, I am able to stand before you all and state with unwavering certainty that Gregory Vincent has made his former dean proud and caused me to imagine still great things to come from him.

Now, Greg, there remains one final honor which you might afford your former dean.  If you would stand, I want to do something that I could not do, when you called that early morning in April.