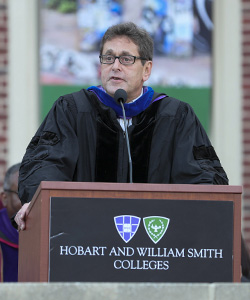 I've been advised by friends and relatives to avoid talking about our president (of the country, not of HWS), and that I should probably avoid talking about politics in general. I've also been urged not to talk about another topic that interests me a great deal, namely global climate change.

As it turns out, I was going to begin by saying something about each of those topics, and that one of the things democracy in America and global warming have in common is that in both cases, we are in really, really deep shit.

I was then going to point out that some of us here have the luxury of living in something of a bubble, where neither of these things affect us right now, or on a daily basis. By way of something optimistic, I thought I'd end by saying if you happen to be one of those folks living in a bubble where you don't spend any time thinking about national and global events, let alone doing anything about it, like, say, voting, enjoy it while you can, because it can't last.

Then I was going to say thank you and head back to my seat.

In retrospect, my friends and family were right that that would've been a terrible way to begin. What an unclear introduction that would have been! What are you supposed to take away from that as you start your first college semester? The point was to try to be the first of many of your professors who will challenge you to think about the enormous position of privilege we are all in if we are sitting here at Hobart and William Smith.

Not that you should feel guilty about that, after all, it was mostly dumb luck that got each of us in that position. But there are some responsibilities that go along with being lucky that way. And what a great place, being in college, and being at HWS in particular, to think about those things.

In mulling this over, I realized that I am actually more optimistic than that. There really is reason for cautious optimism about both the future of democracy in America, and the future of the planet. That reason is, in a word, you. Things are going to get worse before they get better, but I doubt that it will be the people who caused these problems who will solve them. But your generation might.

When I went to college, you had to work much harder to be any sort of national or global citizen. Do find a way to figure out your own connection to the wider world, and don't just retreat from them into other centuries in the world of academia. Of course, I dive into academia and other centuries every day, and with both feet. What I'm suggesting is that we don't only do that.

While I don't have any specific prescriptions that are quite universal enough to fit everyone in this pretty large and diverse group here, but I do want to suggest that things like the future of democracy in America, and if that's not big enough, even bigger things, really do depend on it.

Others today have mentioned, or will mention, how lucky you are to be spending four years (give or take) here at Hobart and William Smith. There are lots of ways that a liberal arts education can change your life.

However you all imagine your life in 5, 10, 20, or 40 years, there is one thing you can all do during the next four years. That thing is the single, overarching, main purpose of a liberal arts education, wherever and however you will be living in the future.

Whatever else you do, try your best to make the inside of your head a more interesting place to live.

It's where you'll be living for the rest of your life. There've been great suggestions offered today about how to go about working on that project. It takes work to figure out which of those apply to you.