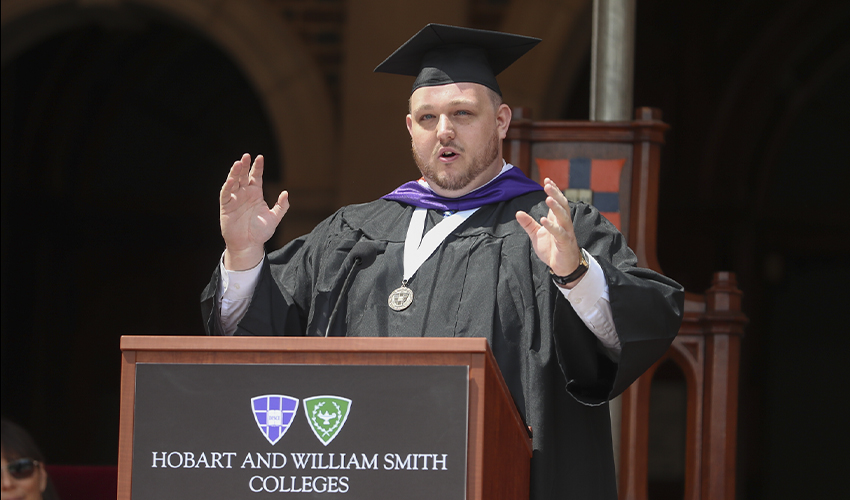 You know, there was a time when I never wanted to come to Hobart and William Smith. I wanted to go to a tech school to be an engineer or something. But I was interested in topics other than math and science. I wanted to discuss religion and politics and philosophy as well. I began to freak out, concerned that I was committing myself to a life of nuts and bolts too soon. I told my mother about my concerns, and she listened to what I had to say and where I was coming from. She calmed me down and suggested liberal arts colleges, like the ones bathroom joke books make fun of. She decided to drive me to Geneva and show me around HWS. When we walked through that gap between Williams and Medbury, I knew this is where I wanted to be, where I needed to be. I think my mother thought that too, and I'd bet she knew, deep down, 5 years from then she would watch me graduate from her alma mater on Mother's Day.

To all of the mothers in the crowd, I want to wish you all a Happy Mother's Day. I believe it is fitting that we are graduating on Mother's Day. If you think about it, our first teachers are our mothers. And now, we are collectively celebrating our achievements in education with the people who kick-started that process back on day one and have been supporting us ever since. Our mothers were our first educators, and I want to thank you all for that.

This process of listening, asking questions about others and absorbing what they have to say into your heart, mind and soul, requires us to be vulnerable. We need to expose our soul, prepare to have it poked and prodded, have our world view shaken. How else can we grow? It may be uncomfortable and difficult, but it is the fundamental aspect of connecting with one another. This process of listening is what I am charging us all to do as we leave HWS.

When I think about my most impactful moments on campus they were the ones where I thought I knew everything, but in fact, I knew nothing. One of the most salient moments was when I was on a camping trip with my fraternity brothers in Northern New York. Sitting around the fire, I made an inappropriate comment. It was not said maliciously, or with any ill-intent. It was said out of ignorance, which can have malicious effects nonetheless. Our good friend Vernon spoke to me about how my language, regardless of intent, can impact others. The same words to two different people can have vastly different effects. This was not the first time I heard this, but it was evidently the first time I listened and took it to heart. I hurt a close friend, a brother, all because I never came to understand his point of view. I was ashamed. What made this moment so salient and has continued to affect how I approach conversation is that I listened. I said something out of ignorance, I made myself vulnerable to criticism, and I listened.

Many of the problems we face in this world are due to ignorance. We often ignore the things around that do not affect us directly or that are too different from us. We have people unfriending and blocking and fighting with people on social media because they do not want to appear vulnerable or challenge their assumptions. We are creating echo chambers for ourselves. "We shouldn't help so and so because I haven't been 'helped' yet. Take care of me first." Stop. Stop. If all we ever do is take care of ourselves first, at the expense of others, we will never fix the problems facing this planet. We need to stop talking about ourselves and our often insignificant problems, and instead start asking others about theirs and ask how you can help. This is listening with a purpose, the purpose of compassion.

Graduates, I want to charge us all with a few tasks as we live this place. Take care of yourself, but not at the expense of others. Much of this world has been built on selfish and self-serving grounds, and it is time to change that. Meet new people, do new things, and engage in as many conversations as possible. Expand your world view and your appreciation for others. Don't be afraid to build something and not reap the benefits. Make yourself vulnerable. You learn the most about yourself and others when you are not able to rely on the usual comforts. Connect with others, especially those who are on the surface the most different from you. Our bonds with others are what make this life worth living. Cherish within your heart the love of those characteristics which will make you the best partner, parent, neighbor, co-worker, and friend as can be. Don't silence those who have been silenced their whole lives. Often, it is the silent person in the corner who has the best stuff to say. And lastly, for the love of God, shut up and listen.