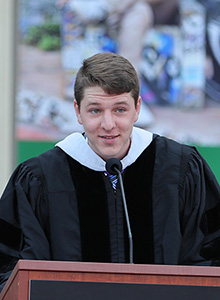 Hey everyone, I'd like to thank Dean Baer for the kind introduction and everyone else for their inspiring words. In case you were wondering, yes that was me at the Variety Show on Saturday night wearing the panda head and the night gown. But you'll be able to see a different side of me today. So I have a few quick things to share.

I’m a big basketball fan, any basketball fans out there? Have you heard people say that basketball is like high school? But we’re in college now. What does that mean? Well, we're still the players and while our professors can be considered the assistant coaches, whether we like it or not, we're the head coaches now. And come to think of it, except for campus safety and the deans, we’re the referees now too. Each year you take more and more control of your life. And by the end of your four years you're expected to be in complete control. And that may sound scary but it's not, it's exciting. Cuz you'll be able to look back at the past four years and see what you've done, the people you've met, and the support system that you've established.

Hobart and William Smith Colleges is like hotel California, "you can check out any time you want, but you can never leave." That may not be the perfect explanation but give me a chance to explain myself.

So let me tell you about a time I tried to check out. After a long long day of interviewing candidates as a member of the presidential search committee, as soon as we finished I ran into the bathroom and changed out of my suit and into my sweatpants for the flight home. And the Chair of the Board of Trustees Tom Bozzuto looks at me and says, “why did you change.”

I’m thinking in my head “why is he asking me, after being in a suit for 12 hours, why I changed into my comfortable clothes for the plane ride…?” I really couldn’t understand why he was questioning it. And he looked at me and said, “Always wear a blazer in the airport, you never know when you’re in a job interview, you should always look and act professional.”  He then told me that he once offered someone a job that he met in a CVS.

So after hearing that advice, and I don’t know if I’ve told him this yet, but for spring break I flew down to fort Lauderdale, wearing a blazer the entire time. What his advice did not touch on was “what happens if the airport you’re landing at is 100° F” and you’re sweating like a pig? But, I wore that blazer nonetheless. And this is where the story gets interesting, I was walking through the entire Rochester airport, in my blazer. I hopped on the plane, flew to Fort Lauderdale, got off the plane and walked through the entire airport sweating all over, and then all of a sudden…. (pause) … I was leaving the Ft. Lauderdale airport and not a single person had offered me a job. But maybe the next time it will happen! And that’s okay because I want to go to graduate school anyway!

I’ve also gotten some great advice from John Cena. Everyone knows John Cena right? Well he’s a pro wrestler who once said, "If you don't learn from your mistakes, then they become regrets." Think about this.

Now everyone sitting down in the audience and everyone on stage, I'm sorry to those not sitting in a chair…. But reach under your chair. Come on, I'm not kidding, even you President Vincent. You'll find that nothing is there. Now hold that nothing out in front of you. This represents the amount of regrets you should have at the end of this academic year. You’re gonna make mistakes, you’re gonna have bad days. Learn from them, use your growing support system that you have to help you ensure that those mistakes don’t become regrets. And always – always – wear a blazer.