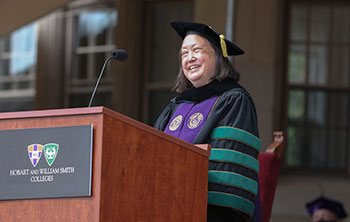 To the Classes of 2021: Hello again! I last addressed you about an hour ago when I convened this gathering, back before you came up here to receive your diplomas. And now that you've made it through most of this commencement ceremony, I am in the enviable role of being the last to congratulate you officially.

My speech is also the last big obstacle between you and, well, lunch.

But I'm going to ask your forbearance for another nine minutes while we look back together on what just transpired. As in the last four years of our lives.

A friend of mine, who is also a college president, likes to say to his students: "If these turn out to be the best four years of your life, we've failed you." Given that the last fourteen months have set a pretty low bar, I can almost guarantee that's not going to happen in your case.

So, what did we-all learn?

At the beginning of this academic year, I declared it would be the year of engagement. That was not just meant to be ironic, given that we were going to be facing big challenges of how to conduct a residential educational experience during a pandemic in which we were discouraged from being within shouting distance of each other, but rather was to set a goal for myself and many other staff members for this year to create a greater sense of engagement for all those in the HWS community regarding campus, national, and world events. Perversely, moving to the zoom world actually made some aspects of engagement easier, such as reaching out to our worldwide community of alumni, alumnae, parents and friends, and making it possible for your family to see you during more campus events without having to come to campus.

On campus, the shared experiences of living through a challenging year, including the national election season in which we all brushed up on high school civics topics like how the electoral college works—and learning enough about pandemic management for us all to get doctoral degrees in epidemiology—may not have always felt like fun engagement, but was oddly engaging nonetheless. The collective experience of living through this period has hopefully taught us more about how much we have in common and how much we have to rely on each other in order to make it through difficult times. There were many points during the year where we called for both individual and collective responsibility in keeping each other safe. And sometimes, actually often, the individual came into conflict with the collective, and we had to learn how to navigate those conflicts.

The tension between individual and collective behavior carries over beyond the current period and will be there throughout our lives. It is always a challenge to build community and to hold it firm through all types of weather, real and metaphorical.

Think about how different your time here would have been if it hadn't been for our chief photographer Kevin Colton. Kevin shows up at events large and small. He directs traffic, trains people how to smile for the camera, and memorializes all the important moments that occur on this campus. The photographic record of your time here at HWS is almost unparalleled in terms of both quality and quantity because of Kevin. If Kevin or one of his assistants isn't at an event, did the event really happen?

During your years here, all of you have spent quality time with one or more of the Hobart and William Smith College deans. One of the first people I met when I arrived here was Lisa Kaenzig. Lisa is invariably "on", in the moment, and always attentive to the needs of others, whether a student or another staff member. Lisa was joking last week that I must think she is a crier because she cried, I think from pure relief that the ceremony was happening, at the last few ceremonies we took part in together. But mostly I don't feel like it is a ceremony unless Lisa is there, whether crying or not.

Now I know that you have all interacted with Brandon Barile because Brandon has, on some days pretty much single-handedly, been administering our COVID testing program all year. If someone had told Brandon when they were studying for their doctoral degree that this was going to lead them to a job in which they would get to hand people nose swabs hour after hour for days on end, no doubt Brandon would have run screaming from the room right then and there. But, when faced with the reality of needing to keep our campus safe, Brandon did what needed to be done, stepped up to the task at hand, and did it with an ever-smiling countenance. We are all here today because of what Brandon did, day after day this year.

Another person who seems to be everywhere at all times is Khuram Hussain. In your years here, he has held, and still holds, multiple roles. He's a Professor of Education! He was the Hobart College Dean! He's our First Vice President for Diversity Equity and Inclusion! This year, it didn't seem like a zoom session unless Khuram was on it. Sometimes leading the discussion, sometimes lending his gravitas without speaking. But always inspirational.

And then there's Shirley Hanson. Generally just known as Shirley, because her fame is of the level of those who need but one name, like Adele, Beyonce and Bono. Shirley is already one with us, as she was declared an honorary member of the Class of 2013. And an honorary member of the Class of 2018. Shirley will probably wrack up a few more honorary class years before she retires. It wouldn't seem like Saga without Shirley.

I mentioned five people by name today who most of you know, but there are many other people at HWS, many of them here today, each of whom have had at least as big an impact on one or more of you. Faculty members, coaches, classmates, friends. People you took transformative classes from and sought advice from, people who helped you when you were down, when you needed a hand. I know you, the Class of 2021, picked your own group of five, your set of Hobart and William Smith honorary class members, including Brandon, along with Katherine Cowles, Robb Flowers, Craig Talmage and John Young.

They were, and are, the glue. We can all be glue. We are all glue-worthy.

So, I said we were going to look back together on your college careers, but actually what I really want to do is to look forward. Because the real point of the last four years was to prepare you for the next eighty-six years. I used eighty-six as the outer bound because our current oldest alum is Alta Boyer, class of '36, going on 107 years old, and I figure there are good odds that at least one of you will last at least that long as well.

So, my gentle exhortation to you today is: go forth, and be the glue. Pay it forward by providing your glue to other communities to help hold them together.

Disce Bios Psyche. Learn Life Soul. As you go through and about your lives, remember us, your HWS community. Oh, and Be the Glue.