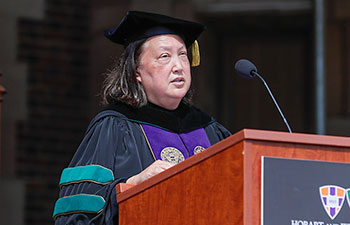 So, hello again, now to the Graduated Classes of 2020! You are Not the pandemic class. That moniker was reserved for the Class of 2021. You are the Weird Class.

After all, you are the class that had four different college presidents during your time here. Weird.

You are the class who named me and my economics department colleague, Tom Drennen, as your honorary members. In other words, you embraced people who espouse The Dismal Science. That is Very Weird.

Now I don't know what exactly the Rest of you have been up to for the past twelve months, but I'm guessing it was also kind of weird.

After all, you got to spend your first post-college year in a world that was locked down and socially distanced, that was gripped by social and political unrest, that was obsessed with rules and rule-following and rule-not-following. A world that wasn't fully ready to greet you into your next stage of adulthood and independence.

We here at HWS kind of wish you had all stayed here with us over the past year. Here on campus, we could have used your hard-earned wisdom, your irrepressible energy, and your well-honed sense of humor. Frankly, we had a hard time here without you. We made it through, and we kept the place neat and clean for your return, but we would have enjoyed your company.

We felt terrible that we were unable to give you a proper send-off last spring. That's one of the reasons why it is so great that we were able to celebrate you today, back where your college years started, on the Quad in front of Coxe Hall. I wasn't here to greet you on your arrival day, but I am honored that I am here to greet you today, at a day marking both your commencement and your first college reunion. Even though that is also kind of weird.

Now, as a professor, I feel the need to digress momentarily regarding the meaning of weird, since I've now used that word a lot. Weird sounds like a relatively newish slang term, and we often use it informally to mean something that is strange or bizarre, but actually it is an Old English term, as in c. 1400, meaning "having power to control fate" from the root "wer-" to turn, or bend". (1) hmm... you probably weren't thinking of weird in that way, but maybe it is how you should think of it. Things that are out of the ordinary may come from the workings of the Fates, or the weird sisters, as the three fates were known in Middle English terms; the three goddesses who control human destiny. So we don't have the power to control fate, but They apparently do.

Here are some other weird things that happened to you, and us, this past year. We all learned a lot. We learned more about both empathy and compassion, and how the two are not the same. I used to think they were the same, but now I understand that they aren't. For instance, I don't really know what you went through over the last year, so I can't feel what you felt, or empathize with what you experienced, but I can feel compassion for you, because I am sure that it wasn't all good. We also learned a lot about epidemiology, which usually I just think of as a cool field of study that maybe I would have gone into if I hadn't become an economist, but this year it suddenly became a matter of daily discussion. Most years after leaving college I learned some new stuff, but this year it seemed like way more than usual. It was kind of like being back in college, including eating a lot of take-out pizza.

Besides learning a lot, we spent a weirdly larger than usual amount of time thinking about what is really important in life. A well-functioning health care system, for one thing. Close friends. Family. A secure internet connection. A meaningful career. But also, casual acquaintances, and free time, to be spent both indoors and outdoors. The ability to travel freely, to meet new people, to experience new things. It wasn't that we weren't all thinking about these things from time to time, or even usually, before last year. But this time we all got to do it together. We didn't agree on everything, but we agreed on a lot of the same things.

We were also weirdly in more agreement regarding the key moments of the past year. For pretty much all of us here today, except the really die-hard Kansas City fans, we were just happy that the Super Bowl got to be played at all and that we got to watch it on February 7, let alone that Ali Marpet's team, as we think of the Buccaneers, won. We all cheered on the creation of the first two US COVID vaccines, developed and approved in under a year, with the first "jabs" occurring on December 14th and 21st. We all mourned the passing of Ruth Bader Ginsburg on September 18th. And George Floyd's murder on May 25th shook, and continues to shake, our world. Most years we aren't as coordinated on our happy and sad moments, because we usually tend to be more distracted by what else we are doing, and there wasn't as much "else" this year to distract us.

Think about our honorary degree recipients today. Peter Jemison decided to devote his life's work to art, and also to reinvigorating and perpetuating a Seneca town site. Not a standard career path. Peggy Greenawalt was an economics major at a time when very few women chose that area of study, and went on to get an MBA, again at a time when few women did that. And Michael Curry came to college, to Hobart and William Smith Colleges, thinking he would be a lawyer, took a religion course his first year here, and ended up becoming the head of the Episcopal Church. Those weird life choices led them to do good.

If weird can lead to good, then let's continue to be weird. You'll always be weird anyway because of what you've been through, Class of 2020. But embrace that weirdness. Be at one with your weirdness, and the weird collectivity of what we have all been through. Let that feed your compassion for others, who experienced their pains and losses, just as you experienced yours.

Above all—and I'm not just saying this because I'm a college president and this is what we're supposed to say, the party line we're supposed to tow—above. all, keep alive your love of learning, your lifelong quest for knowledge, your self-education and your others-education. We all educate ourselves and we educate others. Keep the dialogue going. Be the geeky person who wants to know more. Be the weirdo who cares about ideals, who doesn't give up on your own goals and ideals and helps others to reach theirs. You showed up here today, whether in person or watching the livestream, to celebrate your college education Even Though we had already given you your diplomas last year! How weird is that?!