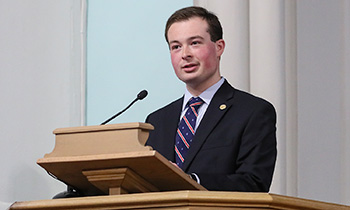 Walking to the chapel, I couldn’t help but stop and think about all the different preparations that went into making this Charter Day a success.

Today’s event would not be successful if only one person planned everything, made every single decision and had to do everything alone. It is a success because there is a community of people who came together to all contribute, each person with a different skill set and different experiences.

In the middle of the Hobart Seal, is the word “Disce.” In Latin, “Disce” is a command to learn or to discuss something.

I first heard this word at my matriculation when Dean Eugen Baer gave his welcome speech. For all of you who have heard Dean Baer talk, you know I just did a terrible job of pronouncing it.

Over the last four years, I have seen a lot of different ways “Disce” has been applied.

From dreaded group projects which you do the night before all the way to having deep discussions.

I didn’t really understand “Disce” until the spring of my first year.

Everyone remembers how awkward their first year is.

I luckily found a solution to both of those problems every Friday. I initially started going to Shabbat dinners because it is a free homecooked meal every Friday. It’s also a communal table, so I didn’t have to try and find people to get dinner with.

So, I started going to Shabbat dinners--and then I realized that it was much more than just a good warm meal.

As I kept going back week after week, it wasn’t just because I got normal food, but because I started to get a sense of belonging.

It was the spring of my first year, that I initially got a sense of belonging to a community. Some people were holding Shabbat dinners in their dorms and houses the next week as people can do once a year--and two seniors invited me to their dinner.

I was being included just like their friends who they had been with for their past 4 years. I realized I was part of a community.

Expanding the circle of connections is so important because you never know how it will affect you and others.

We all don’t realize it, but each of us has the power to give that feeling of community to someone else.

We are a campus of communities, from Hillel to athletics, from Russian club to Investment Club, to all being one campus community. Even something as small as an invite to dinner can make the world of a difference.

The two people from Hillel didn’t invite me to their Satellite Shabbat because they thought it made them important or more powerful. They did it because they wanted to expand their circle and broaden their community.

It takes nothing away from your own flame to help spark someone else’s light.

After experiencing the feeling of being in a community, I didn’t realize that I was doing the same thing those two seniors did for me-- just in a different context.

From the start of my first fall, I started going to Hobart Student Government meetings. Mostly for the free pizza, but also because I found it pretty interesting.

For those of you keeping track, that is now two dinners a week I didn’t need to go to SAGA for!

I kept going because I saw a chance for me to make a difference.

Student government is the way for students to hold the administration accountable, but as I saw, so few people were actually showing up.

For the people who did show up, it was the same people each week.

I knew we could do better, to include many more people, so I started bringing the new friends I had made to the meetings.

First, they probably went for the free pizza, but a lot of them ended up coming week after week.

Not because I made them, but because they wanted to. In the beginning of this academic year, the student governments had everyone go around the room, introduce themselves, and say why they were here.

As I was thinking of what to say, someone answered they were there because of me. I was surprised.

I realized I was the person who brought others together in the community.

I got to be the connector that day, just as the two seniors from Hillel had been my first year. I’m telling you all this, because you are going to do something special for someone and you may never know.

So often, we do not see the ripple of the effect we have on other people’s lives.
That day, I got to see but a small ripple of an impact I had. There are so many ripples which we will never see.

The last story I’ll tell before they shove me off the stage, is about an event I helped organize earlier this semester.

This past year, I have been fortunate enough to be on the Hobart Dean’s Council and work closely with Dean Hussain and a great group of Hobart students.

We all came together and asked ourselves what we wanted to accomplish this year as a group?

Eventually, we came down to wanting to dive into the history of the Hobart Oar. For those of you who don’t know, the Oar is not only something all Hobart students touch at matriculation, but we all get an oar at graduation.

As I sat in the Seneca room listening to a panel of experts talk about the oar, I looked around.
People were expressing a lot of emotion and I could tell they were getting their thoughts gathered for a Q&A session at the end.

There were a lot of different opinions about what role the oar played in Hobart’s heritage; but they all had such a civil discussion. It was one of the most productive discussions I’ve seen on campus.

People weren’t yelling at each other, rather they were bringing out each other’s stories. At that moment, I saw we were talking about our community, not some “other” community.

In these intense moments, people realized they didn’t have anything to lose, but so much to gain.

It is the ultimate sense of community, to be able to talk to one another and say when something is wrong.

Rather than needing to respond to a bad incident--having a civil discussion about history and what it means to so many different people is incredible!

I left that room with a feeling of hope. Hope that discussions like this could help define where we want to go in the next 200 years.

The best example we can set for the future, is that Hobart is not about only the individual, it is about a group of individuals, a community.

We are commanded to go out and learn with other people and gain new shared experiences. You can sit in a classroom all day everyday reading books, but you’ll never get the same knowledge and experience as talking to the stranger next to you or going to a panel and hearing about the life experiences of people you wouldn’t normally hear from.

We all bring such different experiences from before we started college all the way through to this day.

We should share these experiences and learn from them.

“Disce” is not just on the Hobart seal because it looks nice. It’s on it because it’s a directive to each and every one of us. As we move forward from this day, we all need to take the command to go and learn and talk to other people and become engaged!

We need to go and create a larger community and learn from everyone. It is through this that we are at our best.

Charter Day wouldn’t be a success if only 1 person planned it, brought everything for it, and attended it.

Charter Day is only successful because of all the people who worked together and because of all of you. Just like Charter Day, we all need to go out and get more engaged, expand our community, and invite others to join the difficult conversations with us.