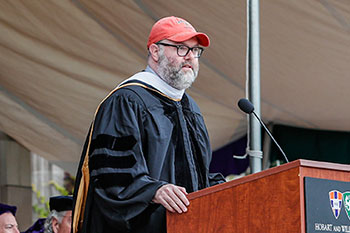 President Jacobsen, Members of the Board, Fellow Faculty, Staff, Students, and other members of our communities, on behalf of the faculty, it is the honor of my tenure here at the Colleges to address you as the Presiding Officer of the Faculty, and to do so on the occasion of the inauguration of President Joyce Jacobsen, our first woman president. You don't have to be a historian to know that this is a pretty historic day.

And you don't have to be an economist to know that President Jacobsen, a member of the faculty in economics, brings a stellar career of research and leadership to her new job. In these challenging times for the United States, for the world, and for the very idea that the arts of rigorous inquiry and critical reflection can improve the lives of all of us, it brings me hope to be here today, and to help inaugurate the tenure of a new president. So, President Jacobsen, warmly, truly, and officially, on behalf of the Faculty, congratulations, and welcome.

I knew I would like President Jacobsen from the start. She is frank, funny and serious at the same time, dedicated to the life of the mind, and she is from Reno, Nevada. I'm from Sacramento, California, just over the hill as it were, and there is something about the West and the Sierra Nevada mountains in particular that stays with you wherever you go. But President Jacobsen really sealed the deal for me when, on her very productive if somewhat eccentric Twitter and Instagram feed, she posted an image of the front page of Thomas Hobbes' Leviathan, published in 1651. It takes confidence to turn Hobbes' famously stark description of life outside of the commonwealth, a life that he says is "poor, nasty, brutish, and short," into a hashtag. We have this first edition of the text, and that copy is on display for you to see too, in the library. I encourage you to take a look.

The image depicts a body made up of the bodies of numerous other people, with the unmistakable head of the absolutist king, Charles I. This artificial man, Hobbes says, is the state, and it stands over the city holding the customary symbols of sovereign royal authority. At her first appearance at a faculty meeting, President Jacobsen highlighted the book and image again, hashtag and all. She urged us to think about the book as evidence of our great special collections, and as inspiration for philosophical reflection, for the life of the mind. I have to say, again, this is quite a striking thing with which to begin one's service as a leader. The Latin phrase on top of the picture, from the Vulgate version of the Book of Job, reads non est potestas super terram quae comparetur; there is no power on earth that compares to it. Subtle. As the new president discussed her admiration for Hobbes's Leviathan before the faculty, I know I wasn't alone in thinking, "gosh, she really isn't messing around."

But on closer inspection, as President Jacobsen will no doubt be aware, as I've learned and discussed with colleagues like Professors Karen Frost-Arnold and Jodi Dean, the image, and the book and the ideas behind it, are hardly so simple as the celebration of unlimited power that they are often, and I think mistakenly, taken to represent. For one thing, the body of leviathan, or the matter and form of a commonwealth, is artificial, that is to say, its the product of artifice, of art, of work, and of collective work at that. Hobbes says that in a project of mutual consent we come together to authorize a figure to be responsible for the common peace, to ensure security and justice, to be responsible, in the end, for deciding what justice and equity will have meant for us, and what they demand of us, what we owe each other. Pretty serious stuff, and powerful too. Its a sign of how layered and complicated this idea is for Hobbes that while this impressive figure has the head of Charles I, the actual head of Charles I had been removed from its natural body by Parliament, the assembly, more than two years before. So is the assembly sovereign? Is it whoever has the force of will to make themselves sovereign? Its not entirely clear what we're supposed to think.

It turns out that arriving at a single, sovereign, authoritative interpretation of the image is impossible, and maybe that is the point. As a student of early modern legal and oceanic history, I take particular note of the fact that the figure appears to be standing on the shore, facing the land, and I've come to see it as a pretty stark example of that old familiar warning, never turn your back on the sea, although I'm not sure I have convinced anyone else of that, at least not yet. It is, we should note, the year of water here, and as several colleagues like Professors Beth Kinne, Meghan Brown, Tara Curtin, John Halfman, and Susan Cushman would no doubt remind me, our relationship to water is the most important thing about us, not just as a school, but as a species. The water in the background might be the real force in the picture, ironically perhaps, from this perspective, a message of the limits of human power.

Another, smaller piece of this history shows up in our collections, too. As I began some of my own current research on Herman Melville, at the behest of my senior colleagues Professors Michael Tinkler and Susanne McNally, I took a look in the archive at records pertaining to a former student, Philip Spencer, who was here in the late 1830's. He left for an equally troubled stint at Union College, and then joined the Navy. It was on board the USS Somers in 1842 that Spencer, the son of the sitting Secretary of War, was executed along with two other men for rumored mutiny. The event, labeled the Somers Mutiny by history, was considered by many to be a gross miscarriage of justice. It haunted the officer who initially reported the rumors, and who just happened to be a cousin of Melville's. These rumors may well have been based on something as dreadfully threatening as a game, a play, a lark of maritime romance and nothing more. Melville would go on to explore these themes and more when he turned the event into the basis for his last work, Billy-Budd, Sailor. So, here, at these Colleges, in these archives, we have a deeply complex image of power, of rule, the state, and we also have a tragic memory of its understory, of mistrust and suspicion, cruelty and resentment, of violence and injustice.

I think about Hobbes and Melville and Spencer a lot as I walk around campus, and I think about what we owe each other. I also think about these traces, these memories, these fit materials for the activity of recollection that can drive the ethics of humanistic inquiry. I think about the markers of the Sullivan campaign waged under order of George Washington against the Six Nations peoples of the region. I think about my office in Henry House, which used to be a finishing school for young women, and the windows still bare their traces: they scratched their names into the glass before they went off to be married. An act of self-assertion, memory, and power. Along with Elizabeth Blackwell, and countless others, I think Clara, Mary, and Agnes would have liked today, too. Part of what it means to be in a genuinely intellectual community, I think, is to acknowledge the fact that what each of us owe each other is also a question of the claim that the community and its history has on us, of what we owe the dead.

I think about that image, Leviathan, the matter and form we give ourselves, and in the end I think its not about rule, or rules, or some particular office or policy, its about the very nature and the risks and challenges of commonwealth in the first place. The responsibility for securing, discussing, and constructing rests with everyone, and part of the very serious burden, and joy, I hope, that President Jacobsen has taken on, it seems to me, is to help us know and live that responsibility. This, and nothing less, is what we celebrate today. Thank you, and again, welcome.