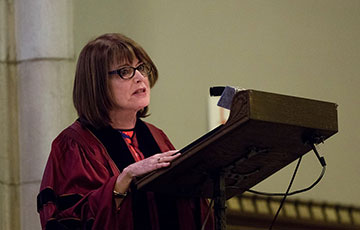 Thank you President Gearan. And thank you Chaplain Charles for inviting me to address members of the Classes of 2016…especially because tomorrow I will become a member of your Class! Welcome to the graduates, your families and friends, my fellow trustees, faculty, staff and a special welcome to MY family!

I’m about to end my tenure as Chair of the Board of Trustees…along with completing my 22 year tenure as a Trustee. I also just sold my financial planning business and retired. So, like you graduates, this is a time of great transition for me.

I’m hopeful that you will appreciate these few minutes WAY more than students in the Middle Ages did when Baccalaureate services began at Cambridge University. In those years, according to Cambridge’s records, monastic devotion was expected of each candidate for graduation and he (back then, it was only “he”s) was to (and I quote) “sit with bowed head over which his hood was drawn, a picture of abject humility and utter embarrassment”.

The tradition came to the United States in 1642 at Harvard and was meant to serve as a counterpoint to raucous commencement activities like (and I quote again) “attacking student theses, gorging at feasts, and drunken revelry.” No surprise that early sermons (and they called them “sermons” back then) “reminded” graduates of the benefits of sobriety!

The HWS community has held Baccalaureate Ceremonies for over 180 years, and in preparing for today, I read a good number of those addresses. Many were full of soaring rhetoric, inspirational philosophy, life advice, ideas on how to be successful. Some, not so much. In 1841, President Benjamin Hale delivered a 22 page address defending the inclusion of mathematics in a liberal arts education. As a math major, I enjoyed it…and thought you might enjoy some excerpts. Just kidding!

What I’ve chosen to do instead is share with you what I wish someone had told me when I graduated 44 years ago. I will stick to three what I am calling “lessons” that have been most important to me.

First: you may be graduating tomorrow, but you are not done with HWS and HWS isn’t done with you. I’m sure you have accumulated a circle of friends these past four years (classmates, staff, faculty, administrators). Tomorrow you will hear that you are “commencing” a new part of your life…which seems to mean you are ending another one. I saw on Yik Yak recently (yes, I look at Yik Yak occasionally)…I saw a couple of you lamenting that you realized you weren’t going to see some friends ever again. Not true. Your circle of friends is actually going to grow as more and more HWS connections expand it. You are graduating into a worldwide force of over 22,000 alumni and alumnae that you will be discovering for the rest of your lives, almost no matter where you live or travel. For instance, Bill Whittaker, one of the anchors for CBS’s “Sixty Minutes,” tells about interviewing a high government official in Japan a number of years ago. While chit chatting after the interview, the official mentioned he went to school in the US and asked Bill where HE went to school. Bill gave the answer that many of you have probably given a few times yourselves: “a small liberal arts school in Upstate NY.” The official asked him “WHAT small liberal arts school?” Bill said, “well, you probably don’t know it…it’s called Hobart and William Smith.” You know the punchline: the official responded, “well, that’s where I went to school! Bill’s HWS circle had expanded…on the other side of the world from Geneva.

I had a “real time” example of this several hours ago. I ran into Associate Professor Emeritus of English Roger Farrand ’49, P’78. Roger knew I was speaking today and proceeded to give me a lesson in oration, right there in the hall. He concluded with “Pitch, it’s all about varying your pitch.” I didn’t tell him that I don’t know what pitch is! HWS, even its faculty, will always be with you!

My HWS circle has even expanded with classmates of mine, sometimes many years after we were students here. And one of those experiences forms the basis of my second lesson: break down walls between you and other people and you may be surprised what you discover and you may even be better for it. Sophomore year, my roommate Sandy and I were looking forward to living in the large room we were going to share as a double in Sill House. At the last minute, an interloper named Shirley was pushed into our room. We were now a triple, with someone we didn’t know…with someone who traveled in decidedly different circles than we did. She was very quiet…even seemed to not like us…and that was actually fine with us. We spent the year co-existing…just barely. I rarely saw her after that year…until my class started getting ready for our 35th reunion. On the committee was none other than Shirley! In many conversations around planning meetings and dinners in the years that followed, I found out what happened our sophomore year when she became our roommate. Shirley’s father had died suddenly two weeks before the start of that term. In addition to the grief she was feeling, she was now in need of significant financial support…hence the last minute assignment to Sill House which back then was a co-op house for scholarship students. She felt bad to be that “interloper,” so she chose to make herself (as she puts it) “invisible” to us. Shirley is now an important part of my HWS circle even though I remain more than a bit ashamed that I didn’t reach over the divide between us to overcome our differences so many years ago, as she quietly suffered in the months after her father died.

I also found out all those years later that Shirley’s family circumstances prevented her from attending our Commencement; she didn’t have a ride home. So, as a surprise for her at our 40th reunion, my classmates recreated our commencement ceremony…complete with caps and gowns, speeches, music, diploma awards and a great deal of laughter.

I lost a huge opportunity to help someone in need, to add someone to my circle decades earlier. How different might we all have been if I had tried all those years ago to tear down that wall??

Finally, and this is the lesson that began the path that led to me being here: do what you need to do to have the right balance of giving and getting in your life. In 1987, I gave birth to my daughter Cathleen, under emergency circumstances. She weighed 1 pound six ounces. It was not good. When she was about one month old, on a cold, snowy Saturday night, the medical staff in the Neonatal Intensive Care Unit told us that she needed a blood transfusion…and that they had asked someone to come into the hospital to make the donation. You see, they are very careful about blood for micro premies…only specifically screened people are allowed to do so. As my husband and I sat waiting for this all to take place, I was in a deep state of despair. I realized that some stranger was driving into the hospital on that snowy night to help my daughter…and I had never done anything so unselfish for anyone, let alone a stranger. Sure, I’d given small donations to organizations that asked over the years, but I’d never given of MYSELF for anything. So, while we waited, I made a little bargain with my God: I said that if somehow my daughter pulled through this terrible start in her life, I would NEVER again be on the wrong end of the balance of giving and getting. I would help others whenever I could so that if I ever needed help again, I would be able to accept it gratefully. What I realized and that you should know is that no matter how lucky you are, how wealthy you are, how many friends and family you have…you WILL sometime find yourself needing help. And when you do, be in the position to accept it gratefully and gracefully because YOU are on the right side of that balance of giving and getting.

And what happened with my bargain? Cathleen spent four mostly rough months in the NICU…but seven years ago, we watched proudly as she walked across the front of Coxe Hall to accept her William Smith College diploma. And me: I held up my end of the bargain by beginning my work with nonprofit groups…organizing to get a children’s hospital in Syracuse…helping my small home community with projects for common good…and 22 years ago joining the HWS Board of Trustees in appreciation for the scholarship support that my sisters and I received when we were students here. The rest as they say, is history.

I started as Chair of the Board when the Classes of 2016 became students in 2012…and tomorrow I will join you when I am privileged…hugely privileged…to receive an honorary degree. Permit me a final personal reflection. My father, John Collins, will also receive an honorary degree. He and my mother raised six children…and yes, I’m the oldest. Four of us graduated from William Smith College. Three of us married Hobart alumni. As I said, my daughter Cathleen graduated from William Smith; my niece Caroline graduated a few years later and my nephew Nick is a rising junior at Hobart. (You DID pass your exams, right Nick??) If you weren’t keeping track, that’s ten members of my family who have benefitted from an HWS education…with a member of my family on this campus as a student every decade since the 1960’s. And in nearly all that time, my father has been a fixture on this campus. He came to Geneva almost forty years ago after he retired from his career as a NYC police officer to help get the recently purchased Scandling lake exploration boat ready. He never left. In all those years, he has worked wherever he was needed…has loved the generations of students who have passed through…and has fiercely protected this place. Heaven help you if you threw trash on the campus or said something negative about the school! In all those years, he stepped in to do whatever he could to make this a better place...and tomorrow that will be recognized. For that, my family is very grateful.

So, Classes of 2016, I’m proud that I will join you tomorrow. Go forth to expand your HWS circles…tear down walls…and be sure to give more than you get.