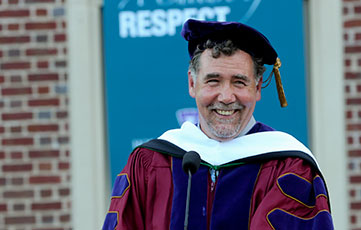 Good afternoon ladies and gentlemen, friends, colleagues, and incoming students to the Colleges.  It is an honor and pleasure to speak to you all today—and particularly to those of you embarking on your college careers here in Geneva.  I want to speak to you as a former Hobart student, and as someone working on the interfaces of public health and human rights, medicine and politics, gender and sexuality.  But before I do, I want to thank President Mark Gearan for the very kind invitation to speak to you all today, and to acknowledge my academic adviser, Professor Suzanne McNally, who was a tremendously helpful mentor and teacher during my years here.  It is wonderful to be back among you all.  And let me just add to the incoming classes—congratulations—you are about to embark on an incredible intellectual, and social experience.

Savor it, lean in, the opportunities before you are precious.

I was happy at Hobart and William Smith.  Friends made here have been friends for life.  While I majored in history, and am no historian, the work I do with my team at Johns Hopkins University really has been built on a framework of interdisciplinary approaches to complex human problems that I learned here.  As I said to Mark Gearan last year, it really is amazing how much the basis of liberal arts and sciences matter in the work we do.

You’re all now engaged in an intellectual journey, an academic one, but also a profound personal and social one—for many of you, this will be start of life independent from your families and the friends you grew up with.  And it’s to these social and community issues that I want to turn, because they are so important to your success here and after—and because while it may seem distant from the study of literature or politics, engineering or biology, the reality is that how each of you interact with each other, shapes how you will engage with the wider world ahead.

In my work in HIV and AIDS, we can’t escape the personal and social aspects of what is the greatest infectious pandemic of modern times.  Some 77 million people have been infected by this virus, at least 38 million have already died, and 25 million people are living with HIV and still don’t have access to life saving treatment.  Most of our human family living with HIV lives in Africa, in Asia, and in the Former Soviet Union.  But among developed countries, the US is an outlier, and we still have a serious epidemic, with about 55,000 new infections every year.  More than 60% of those new infections are in one group—young gay and bisexual men.

What have we learned in three decades of trying to control HIV globally?  Well, leadership matters, and political will.  Both prevention and access to treatment are critical.  Health systems matter, and most have proven painfully inadequate to the task.  Community engagement and leadership are key.  But what really marks the places where HIV continues to spread, and where the suffering and loss of life has been greatest, is something else.  What most consistently stands out as our principal barrier to success against HIV/AIDS is gender inequality.

When women are not in control of their sexual and reproductive lives, when they can’t negotiate condom use, access contraception, or have the right to say no to sex, HIV remains out of control.  In much of Sub-Saharan Africa, the majority of new infections are in girls and young women—and while there are some biological factors at play, the overwhelming driver is the power imbalance between men and women.  And it’s remarkable how potent interventions to address gender inequality can be in changing this dynamic.
We’ve known for years that the single most important predictor in child survival, in household health and wellbeing, is the education of women and girls.  Their empowerment and the achievement of greater equality between women and men.
So how does that relate to you—educated young people, now in college, and living in a time and place where gender equality is supposed to be the norm?

First, we have to acknowledge that as a society, as a culture, we are not there yet—and particularly when it comes to dealing with sex, sexuality, and our ability to speak frankly about our sexual lives.  Sexual coercion, from subtle forms to outright force, is still with us, and tragically, still with us on college campuses.

Second, we all have to take much more seriously the role of substance use in sex and sexuality, alcohol above all, but also the wide array of other drugs, prescription and illicit that also circulate on our campuses.  Substances, when abused, shift the power dynamic toward aggressors and aggression, and are consistently implicated in gender-based violence, and in cultures and contexts of impunity.

Third, we have to face these issues on multiple levels.  Each of us has work to do here.  Men and women.  We have to look inward, and ask ourselves if we are ready for sexual life, and on what terms.  What kind of relationships do we want?  What are our boundaries and how do we make them clear?  Then we have to look to each other.  Are we really there for our friends—including when they are wasted?  Do we have their backs when we might have to confront frightening situations, or look like we’re bringing down the party?  And then we have to look at what we call in my world the structural issues.  Are there contexts and structures, like Greek life, which may be increasing risk and vulnerability?  Contexts which empower abusive behavior—and undermine respect for women?  And if there are, what can we do to change them?  Do we need reform, or a fundamental rethink?

Whether we are comfortable with these challenges or not, we have to face them.  This is a national debate and a global issue—but also a very personal one for each of us.  Woman or man, gay, straight, questioning or trans, we each have to grapple with our sexuality, with the kind of relationships we want, and with the ways we treat each other and wish to be treated.

This isn’t an admonition, but a way toward deep and abiding fulfillment.  Toward real happiness and real growth.  Because the best part of respect, of dignity, and of gender equality is that it so profoundly feeds the soul.  Nothing feels better than taking care of others.  Nothing is more rewarding than giving.  And finding love, in all its varied forms, is the hidden jewel at the center of our desires.

We are all in this debate together, and we have a long way to go.  But as I look out at all of you, I am truly optimistic.  Change is happening, and much of it is because you are the most tolerant generation this country has seen in decades.  Marriage equality wouldn’t be happening without you. And I say that as a recently married gay man who never imagined, as an anxious 18 year old coming out in 1977, that I would ever have that right.

So I wish each and every one of you the happiness that comes from being a true friend, the fulfillment that comes from relationships, sexual and not, that you build on trust, honesty and caring, and also the energy and the passion to help make the changes we all need to happen.

Use this wonderful place and make it even better for those who are going to follow you.