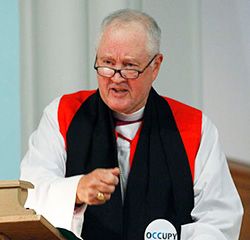 As a preface we acknowledge what happened here 150 years ago. Thanks to architect Richard Upjohn's gothic energy many churches in upstate New York were of this chapel's design. Even Trinity Church in Geneva followed the concept. Through an idea known as "associationism" this chapel was intended to add spiritual energy and discipline to the College by reminding students of where they had worshipped at home and where they would worship and study now. Let us picture the way it was: pews facing each other, the building had no expansion into the upper altar area as now, and you, as good Episcopal laymen, had your character formed through worship with the Daily Office on weekdays. Imagine facing each other and reciting the Psalms antiphonally. You were marinated in the faith. A lot was riding on this building (within the College) as it launched intellect and fused it with moral character. (1)

There's a great tale of Bishop John Henry Hobart getting off his horse and walking over to where Geneva Hall is now, looking around, planting his walking stick in the ground and declaring, "This is where we will build the college." Sounds good and it fits his feisty personality of rugged, expansive thought about the future promise of the Genesee frontier. But the area's residents had been experimenting with ways of education as early as 20 years after the U.S. Constitution and sometime before John Henry Hobart galloped this way.

A school had always been a fragile reality but there was always an indomitable insistence for it too. There seems to be a match between the openness of challenge and the spirit it brings forth in us. Sanctuaries often house that phenomenon. I've seen it at St. George's, Baghdad where after repeated ransacking by terrorists, faithful Jews, Muslims, Coptic Christians, Roman Catholics and the Orthodox worked alongside Anglicans to clear the debris. I've seen it in Brooklyn house churches where victims of foreclosure gather for mutual support and most recently in Zuccotti Park during a Rosh Hashanah service. And before that at the Occupy encampment itself. There's a term for it, topophilia, or the attachment we feel to particular places. Philosopher Martin Heidegger referred to place as "a house of being." A place can be a dwelling for us, an anchor in the external bonds of existence, and where we test the limits of freedom and reality. Truly, the Colleges will be that for most students. To give you a sense of this truth think of Disneyland where all the architecture is false and constructed for reassurance. (3) I like Mickey Mouse but I don't want him as a regular chum. By contrast, you see Heidegger's claim as we pause with this building. The Colleges intended this as special, existential space.

What has the Chapel been and what's it for now? It was Henry Miller who said that, "our destination is never a place but rather a new way of looking at things." (3) The Chapel influences that by forcing the dialogue to include a level of spiritual sentience.

I think it's the way the Holy Spirit calls us to this 150th anniversary and years yet to be: matching location to moment in history. That's happened often on this land. The early school, the Geveva Academy, though started in 1796 couldn't get a charter until 1813. The Regents were so eager to get going that Geneva Hall was built with no clear idea of final payment. Once the project got footing it was really a grant from Trinity Church Wall Street which spurred Bishop Hobart's visit because a fresh infusion of funds would add theological curriculum. Again, as late as 1903, when the College was losing students, millionaire nurseryman William Smith saved the day with resources, enthusiasm and a new idea for women's education. The lesson here is don't underestimate the power of shrubbery and the potency of fairness when addressing equality!

When things seem on the edge, uncertain, and placeless (more about that in a minute) it's a good space to be in--spiritually speaking--because a new sound can be heard even if it's fear in your own voice. And so we read of Solomon. How ludicrous to build a house for a desert god! In the selection from Hebrew scripture, then, Solomon's trembling pleas make sense as he addresses God. 1) We were never sure about "housing", you, a wilderness god; 2) But you, O God, have been reliably with us at these specific times; 3) So let us be confirmed such an experience in future days; 4) Yes, we fret that your mystery cannot be contained; 5) But hear us anew, anyway, as we try in our frail way to meet you here in the challenges that lie ahead.

I discovered one by accident in a recent dustup with Trinity Church Wall Street over a vacant lot I had hoped they would loan to Occupy Wall Street. Little did I know that Catholic worker Dorothy Day had highlighted this paradox many years before. Any land, this building, as place for the spiritual person is both meant for attachment and detachment. It is a tension for this sole edifice on campus if true to its essence. In Day's terms it is intended to be permanent and precarious. It must inspire those who are unsettled to settle and be comforted while simultaneously discomforting the settled person to unsettle him/herself and leave the frozen idolatry of possession which sabotages any belief without assurances, i.e., faith. (4)

Here's another challenge of our time: the world is smaller and our sense of belief is grander. Theologian Marion Grau describes a world filled with polydoxy, that is, many beliefs. It is incumbent upon us not isolate ourselves in a "cargo cult" of isolation or to abandon doctrine but to appreciate how our faith exists in a world where, heretofore, belief systems were isolated from each other. Grau writes of how sacrality and value can form monstrously misshaped responses to cultural cues. That happened in the Pacific as Islanders refashioned their own religious folkways to mimic the economic success they perceived as "wealthy" Europeans off-loaded cargo. (5) I noticed that happened when a mosque couldn't open in the vicinity of Ground Zero. Some had cultically re-interpreted the events of September 11th to require a muslim-free zone around the site. So, I'm glad Chaplain Adams has made her living room for "pasta night" as important for the chapel community as a strict observation of some esoteric, routine of services here in the building. The latter can come perilously close to the edge of cult-appeal latching onto a slim expression of spiritual life for these campuses. No, the model here is livelier and truer in an emergent church model which opens and expands the embrace of many even if it means lowering the liturgical bar.

More practically, another challenge in 2012 is paralyzing student debt. It hovers over this and other campuses with a heavy darkness. And we must be at a tipping point with tuition now above 50 thousand dollars. My wife and I accompanied our youngest daughter on a tour of colleges recently. All were grand looking much like this campus. One got the impression—from all the perks (WI-FI, top of the line gyms, libraries, and every conceivable comfort) that we were booking her on a four year luxury cruise. The blunt challenge in 2012 is to re-embrace a more primitive—perhaps austere—sense of place as lovers of deep learning. Love that and intensify it in a community of study. No end game, just reveling in knowledge. Such a view asks, "Is the concept of a liberal arts education diminishing unless you strap on some tech-econ-savvy?" It seems to be a world de-emphasizing reflection in favor of analysis. It is from this building the issue is pressed on the falsity of making an estimate of character based on your production value.

I recall the one time the chapel was totally full, every seat taken. It was during the Cuban Missile Crisis, 1962. There's transparency: when afraid we seek the comfort of transcendence. But most times—after the chapel requirement was dropped—students would walk by this building or use it only occasionally. An enduring chapel community continues here and I'll bet they wrestle with the relevance which comes with low attendance. No need, every gathering of intention (which is what a college is) needs a place to be in the stillness of a now. It's really what Solomon was reaching for and it is what this next 150 years will be in this chapel's future.

I think the title of this talk is unfortunate. I know I chose it. Words are frail things in these matters. We reclaim and revere those actual moments when a "now" was filled with crackling reality. A person can enter these doors and recall that they sat here, or stood there when during a wedding vow, the water of baptism brought you into a life of walking wet as a Christian by the font. This is the place—right there—where God is made manifest in eucharist. And it can be the place where a now, the open moment of possibility will be thought of, brooded over and delighted in again. It can be the place where bold things are said, irreverent not to God but to any power which diminishes human dignity.

150 years ago there were probably "non-places" that stripped away dignity but I wonder if they flourished like now. Our monochrome highways, supermarkets, fast food restaurants, airport lounges, check-out counters, turnstiles, lobbies (where) we are anonymous, have no identity, relationships or history; these "are places empty of personal meaning." (6)

This is not such a place. No, here we look for committing ourselves to dangerous and important living with consequence. We imagine how it will be for those—many years from now—when our descendants gather to sum up and marshal on in the year 2162. May they have lived in the description of this place—be urged on by that—and not solely in the place itself.

We Episcopalians have prayed over the verses in the 16th chapter of the Gospel of John, where Jesus says, "I have much more to say to you, more than you can now bear. But the when the Spirit of Truth comes you will be guided into all truth..." These have been key verses as Anglicans ventured to understand gender and sexual identity. We have sought Christ in new places; what more will be revealed?

Perhaps in 2162 we will see that "Christness" anew in many faiths. We will not leave the richness of tradition but cherish how God has opened more ways for discernment.

Perhaps this newer space of the tower will fuse the older gothic with the expansive dynamic of the Colleges and be embraced as a place for many faiths.

There is no "perhaps" about this: to understand this building you must stand still with a God authoring, quickening and never abandoning the dignity of every human being through love, justice, and mercy. That warm, receiving presence requires nothing less of us.