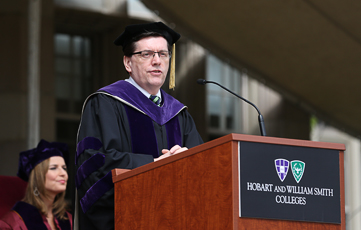 Those were the last words of Steve Jobs. In a New York Times eulogy, Job's sister Mona Simpson wrote movingly about his final hours and the time she spent at his bedside with Jobs' wife and four children. "Just before he closed his eyes for the last time," Simpson wrote, "the man who spent his life in search of beauty looked past those of us at his bedside at something only he could see."

Simpson did not know what Jobs was seeing on October 5, 2011 when he spoke those last words. But they certainly reflected what Simpson called his "capacity for a wonderment." He was, after all, quoted using phrases like "insanely great."

Now Commencements are frequently moments when graduating students are urged to think ahead as you formulate your next steps so you can reflect back on your life to make certain of your choices, your values and your goals.

In his autobiography published 100 years after his death, Mark Twain wrote: "Twenty years from now you will be more disappointed by the things you don't do than by the ones you did."

So allow me the chance to explore this thought a bit more for the Classes of 2012.

You have lived in remarkable times. At the William Smith Senior Brunch, Dean McNally as an historian reflected on the pace of change in recent years.

From 9/11 to changes in technology to the greatest financial collapse since the Great Depression – your short lives have been marked by considerable change. Change in governments – in the United States and around the world. Change in sectors of the economy. Change in our views of religion, government, business and the non profit sector.

And we also know that these massive changes have taken a toll on our society. I was recently struck by a National Journal article entitled "In Nothing We Trust" in which the authors make the case with surveys, poll and events that "Americans are losing faith in the institutions that made this country great."

The authors note: "When people trust their institutions they're better able to solve common problems. Research shows that school principals are much more likely to turn around struggling schools in places where people have a history of working together and getting involved in their children's education.

Communities bonded by friendships formed at church are more likely to vote, volunteer and perform everyday good deeds like helping someone find a job. And governments find it easier to persuade the public to make sacrifices for the common good when people trust that their political leaders have the community's best interests at heart."

It seems we are bombarded by stories of our collective disaffection with virtually every sector of society – the government, business, church, religion, education and non profits.

And so with these forces of change all around us I was especially drawn to a special report on The Future of Jobs published this year by The Economist. The report considered these massive societal changes and its effect on labor markets, trends, companies and workers' concerns, the role of governments.

It also cited a new book by Lynda Gratton of the London Business School titled "The Shift; The Future of Work is Already Here."

Gratton's advice is that 21st century citizens will have to invest more in their social capital in three areas.

First – she urges that everyone should build a posse – "a small group of up to 15 people they can turn to when the going gets rough."

Second – you will need a "big ideas crowd" who can keep you mentally fresh. You will want to surround yourselves with those thought provoking friends and colleagues to keep you vital, active and engaged.

And finally – you will need a "regenerative community" to maintain your emotional capacity – family and friends "with whom you laugh, share a meal, tell stories and relax."

What is noteworthy to me in this book on the future of jobs in the new economy is the importance of people to your future and how this social capital will sustain you in this century of great change and promise.

To me, of course, I believe this is one of the most exciting and important times to be alive.

One of my heroes and mentors was Sargent Shriver, the first Director of the Peace Corps. Shriver returned to his alma mater of Yale University in 1994 to deliver the Class Day Address.

And with classic Shriver optimism and buoyancy he reminded the graduates that despite the challenges of the world, they had the opportunity to work for change. Nearly 80 years old at the time – he bellowed: "I wish I were you!"

And indeed, Shriver was right. You will live longer than previous generations, enjoy advances in technology and health care and the expanding boundaries of knowledge.

I am certain Shriver would say to you today: I wish I were you!

And so I would join with Shriver in urging you to fight these forces of skepticism and cynicsm. I would urge you to look and study the lives of the men and women who have received an Honorary Degree today.

They have lived important lives and operated at high levels of business, finance, journalism, education, philanthropy and social activism.

Leave this Quad today and remember:

Lang Cook's integrity and dedication to his family.

Never forget Jim and Cindy Caird's engaged mentorship and loyalty to these Colleges.

Or Pat McGuire's life of service to engaged learning.

And I suspect you will never forget the thoughtful remarks and perspective of Savannah Guthrie as we will literally be able to watch her in years to come as she uniquely blends her talents in law and journalism.

So perhaps therein lies the antedote to those who would trust in nothing, who would shut down on organizations and institutions that build and nurture community.

The National Journal observes that there are "no metrics that exist to measure life without institutions because they have been around as long as humankind"¦.Humans are coded to create communities and communities beget institutions."

And so I close these Commencement Exercises with my charge to utilize the privilege of your newly minted degree – it is an honor that only 1 percent of the world enjoys.

Use your degree to build community

To challenge assumptions and think critically for the betterment of society.

I know you can do this – because I have seen you on this campus for four years and in this community of Geneva working for change and building meaningful relationships and community.

Your official days as students at Hobart and William Smith now reside in this history of this very special place.

Its time to take up Mark Twain's advice to "throw off the bowlines, sail away from the safe harbor. Catch the trade winds in your sails. Explore. Dream."