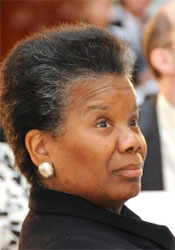 A nationally recognized expert on issues of school reform and civil society, Wendy Puriefoy has been a passionate advocate of education equity for poor and disadvantaged children. For many years she served as founding president and CEO of Public Education Network (PEN), the nation's largest network of community-based school reform organizations. Since 1991, PEN grew under Puriefoy’s visionary leadership into a network of local education funds reaching more than 11 million children in 1,220 school districts and 18,000 schools nationwide.

Puriefoy first became involved in school reform in the 1970s when she served as a special monitor of the court-ordered desegregation plan for Boston's public schools. Years later, after segregation based on race had been declared unlawful, she continued to fight against segregation in educational quality based on poverty.

As president of PEN, she was the leading force behind systemic reform initiatives in school finance and governance, curriculum and assessment, parent involvement, school libraries and school health. With support from national foundations, PEN launched multi-million dollar public engagement initiatives focused on teacher quality, standards and accountability, and schools and community services.

Prior to being recruited as president of PEN, Puriefoy was executive vice president and chief operating officer of The Boston Foundation, a community foundation with an endowment of more than $750 million supporting public health/welfare, educational, cultural, environmental, and housing programs in Boston, Mass. Following her tenure at PEN, she became director for education at The Barr Foundation, which focuses on advancing the arts, climate change solutions and education.

Currently, Puriefoy serves on the boards of numerous organizations, including Public Agenda, DEMOS, Hasbro Children's Foundation, the Local Initiatives Support Corporation, the National Center for Family Philanthropy and the Schott Foundation. In the past, Puriefoy served on the boards of FairTest, Jobs for the Future, Milton Hershey School, Ms. Foundation for Women, The PEW Forum on Standards-Based Reform, Women and Philanthropy, the National Charities Information Bureau, the Council on Foundations, Teach for America, Children's Express, and the Boston Annenberg Challenge.

As an alumna, Puriefoy is distinguished by her service as the first student trustee elected to the Board of Trustees — a position that has continued at the Colleges for more than 40 years. She again served on HWS Board of Trustees from 1992-94, and in 2007 participated in a President’s Forum event. The Geneva 2020 program was inspired in part by Puriefoy, who consulted with the Geneva 2020 committee in 2012 and encouraged the committee to think through important research about key transitions in children’s lives.